Located in the north-eastern part of Japan, the Tohoku region is a treasure trove of natural resources and tradition—especially for seafood, vegetables and wood. To celebrate this amazing region and to promote tourism to the Sanriku area, the TOHOKU EMOTION (東北エモーション Tōhoku Emōshon) Joyful Train was created in 2013.

As the flagship of JR East’s dining Joyful Trains, the TOHOKU EMOTION is a fine-dining restaurant train that incorporates the elements of local and luxury into its dining experience. A journey on board this “Tohoku Restaurant Railway” will tantalize your taste buds with locally-produced Tohoku ingredients in all of its dishes, and delight you with five-star service from the dedicated staff.

I am a huge fan of themed trains, having previously introduced another dining-type Joyful Train, the FruiTea Fukushima, as well as others that run in the Tohoku region, like the Toreiyu Tsubasa, POKÉMON with YOU Train, and Resort Shirakami. Believe me when I say that a trip on the TOHOKU EMOTION is simply unforgettable, and will leave you wanting to ride it again!

Even with my first look at this train, I was already excited. The exterior and interior are designed to look like a fancy restaurant, right down to the details like the canopy and lamp hanging at the entrance, and the rolled-out red carpet. The on-board service was impeccable, and the staff really made me feel like a VIP customer. 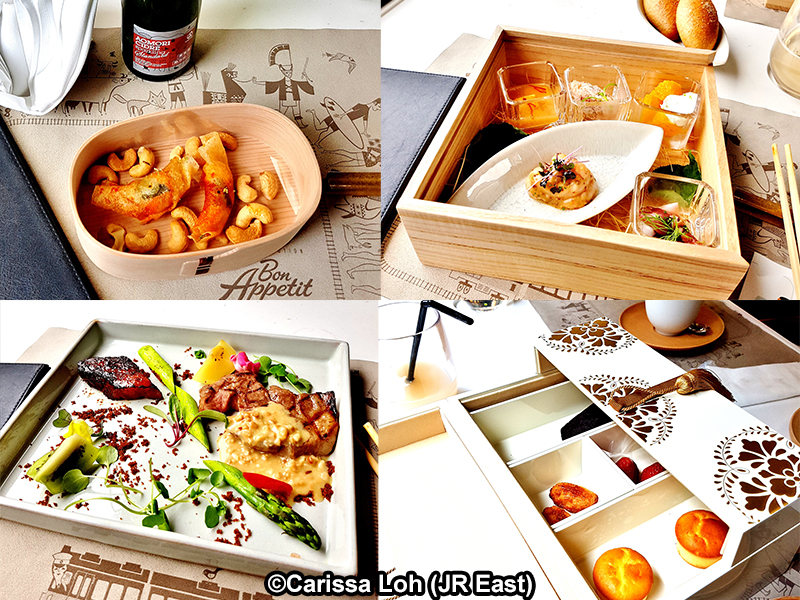 I had the opportunity to feast on the TOHOKU EMOTION's scrumptious lunch once, about two years ago in April 2018. The four-course lunch was a French-inspired menu, created by Chef Ogata of the restaurant 「nacreé」 in Sendai. It began with shrimp starters, followed by an assortment of seafood and vegetable appetizers, a pork chop and asparagus main dish, and ended off with a selection of desserts served in an exquisite lacquer box.

All meals on the TOHOKU EMOTION are created with locally-sourced Tohoku ingredients, using food to introduce the region to the riders. Even the materials and techniques used to create the dishes and containers are from Tohoku.

The thought and detail that go into creating this dining experience is amazing! 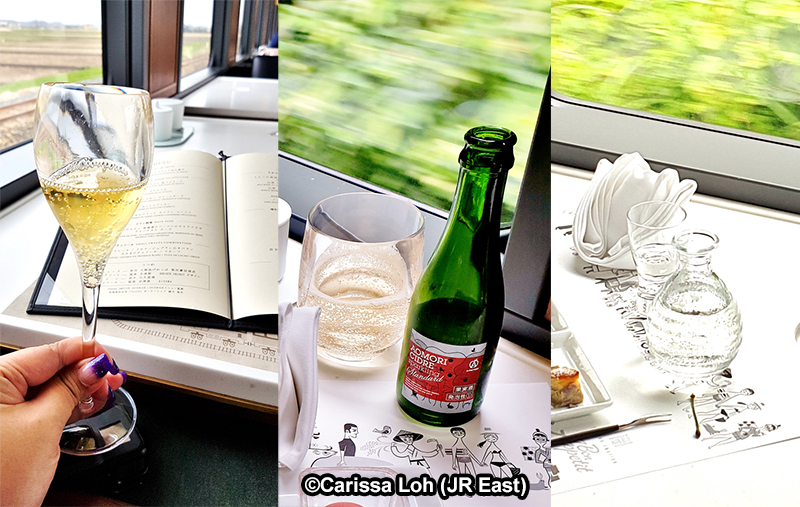 When you first take your seat, you are served a welcome drink of non-alcoholic sparkling apple cider, produced in Aomori. After that, drinks are free-flow. Locally-produced alcoholic selections include Aomori Cidre, a locally-brewed apple cider from Hirosaki in Aomori Prefecture; white and red wines from the Takahata region in Yamagata Prefecture; and sake from Iwate Prefecture. I highly recommend the refreshing and delicious Aomori Cidre! Locally-produced non-alcoholic selections include apple juice from Aomori, and mineral water from Iwate’s Ryusendo.

My boss rode the TOHOKU EMOTION again in June 2019, and this time, the menu was a Japanese-Western-Chinese fusion created by four chefs from Hotel Metropolitan Morioka in Iwate. The six-course lunch had a tofu starter, six different seafood and vegetable appetizers, an herbal soup, chirashi don (チラシ丼 assorted sashimi on rice), a roast beef main dish, and a selection of desserts. Again, the meal is created with locally-sourced Tohoku ingredients, using dishware made with local Tohoku materials and techniques.

The TOHOKU EMOTION’s menu changes every three to six months, so you can look forward to something new the next time you ride it! For April to September 2020, the outbound lunch menu will feature creations from Chef Harata of 「trattoria LIPAGIO」, a popular Hirosaki-based Italian restaurant. It will consist of an appetizer, a pasta dish, a main course and a selection of dessert. The inbound dessert buffet will continue to be overseen by pâtissier Chef Kumagaya from Hotel Metropolitan Morioka. 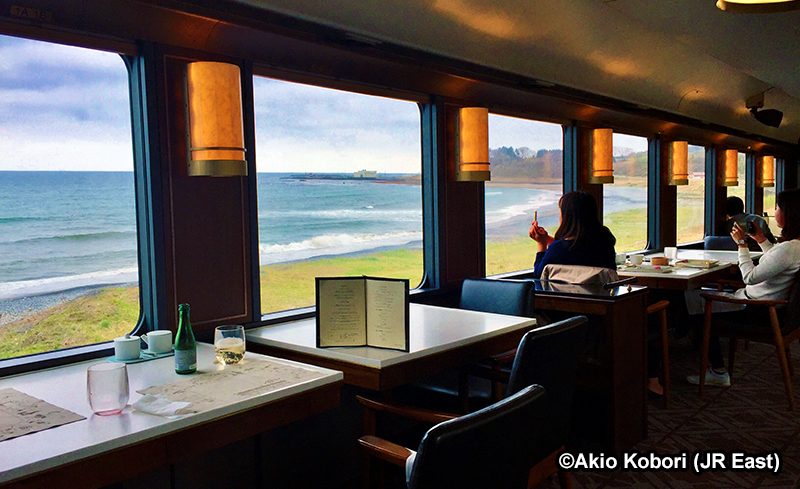 The outbound journey from Hachinohe to Kuji takes about 2 hours, giving you ample time to eat and enjoy your ride. In addition to the delightful food, the views of the ocean are also a highlight of the TOHOKU EMOTION.

Staring at dynamic scenery like endless blue waters and friendly locals waving to you as you dine is an experience you cannot have at a regular restaurant. The train even slows down at scenic spots, so that you can have more time to enjoy the views and take photos! The entire trip was wonderful, and easily one of the best dining experiences I have ever had. I really hope to be able to have lunch on this train again someday!

The TOHOKU EMOTION runs along the Sanriku Coast on a local line, the JR Hachinohe Line, from Hachinohe to Kuji. Along the route, you will see local volunteers welcoming you with flags, and residents waving their hands as the train passes by their homes! The Japanese spirit of omotenashi (おもてなし hospitality) is present everywhere, and can really be felt in the warm countryside. At the platform before departing Hachinohe, staff hold a banner saying “Bon voyage, have a nice trip” to bid riders farewell.

The TOHOKU EMOTION is made up of three cars: an open-dining car resembling a restaurant, a private compartment car where you can have more privacy for your group, and a live kitchen car.

Even in the interior decorations, local crafts and materials are heavily featured:

Get ready to satisfy your sweet-tooth, because for the inbound journey from Kuji to Hachinohe, it is an afternoon dessert buffet. First, you will be served a drink of your choice, followed by a fixed platter with three creations, including a specially-made TOHOKU EMOTION white chocolate. After you are done, you can help yourself to the buffet in Car 2, which will be open until about 30 minutes before arriving at Hachinohe.

The buffet consists of a variety of cakes, tarts and jellies. Don’t worry if you are not a fan of sweet stuff, there are also savoury hors d’oeuvres like cheese, ham and seafood, made with Tohoku ingredients! Drinks are free flow, and for the non-alcoholic selection I highly recommend the Aomori apple juice—Aomori produces most of Japan’s apples. Alcoholic beverages are also available, depending on how much is left from the outbound journey. 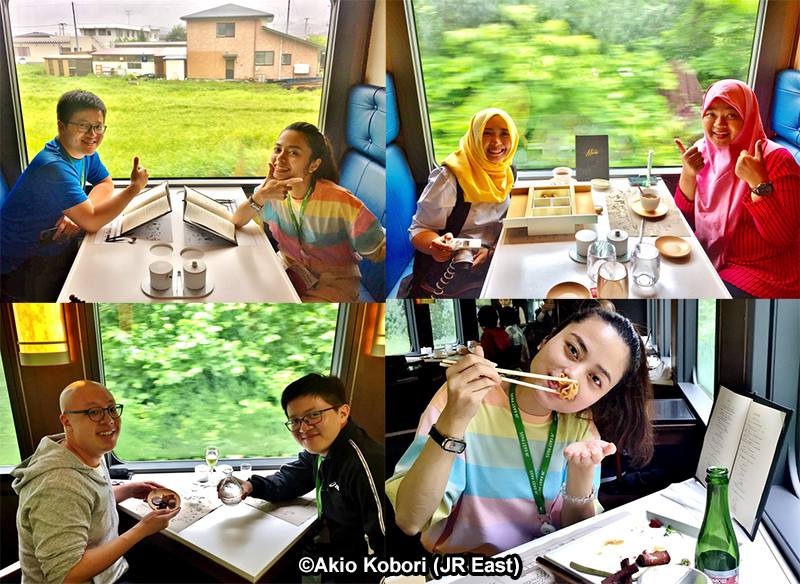 The inbound trip from Kuji to Hachinohe takes slightly less than two hours, giving you plenty of time to enjoy dessert, delight in the scenery, take a lot of photos, and chat with your family and friends.

Most people take a round trip (lunch course + dessert buffet) on the TOHOKU EMOTION, departing from and returning to Hachinohe Station. However, if you are looking to explore the Sanriku Coast more in depth, you can take a one-way journey and check out some of the sightseeing spots in this charming area.

Kabushima Jinja is a Shinto shrine on top of the tiny island of Kabushima. The island is a nesting ground for black-tailed gulls (うみねこ umineko), so you can often catch the sight of thousands of gulls gathered around the shrine between March and August. The shrine completely burnt down in 2015, but has recently re-opened in March 2020. 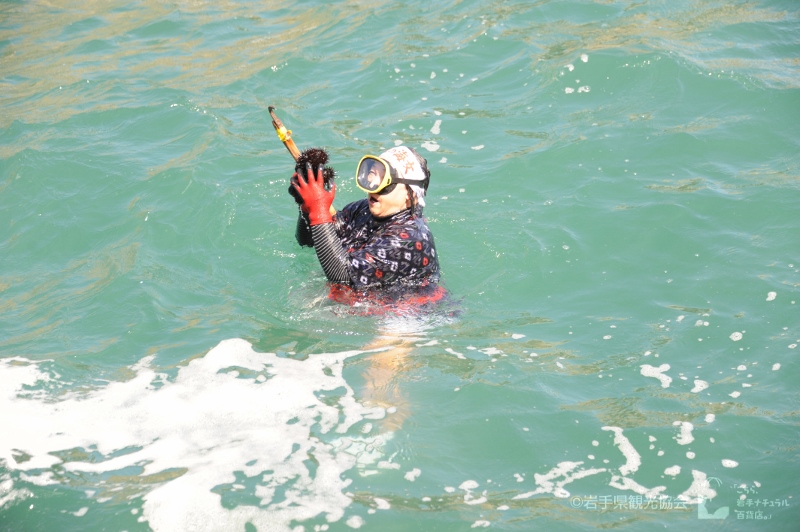 Kuji is well-known as the stage for Amachan, a 2013 NHK morning drama about the ama of the Kosode Coast. Ama (海女) are female free divers who catch abalone, sea urchins and other shells from the sea. You can also enjoy scenic cliffs along the drive to the Kosode Coast.

A trip on the TOHOKU EMOTION. (Video credit: JR East)

As meals are part of the experience, the TOHOKU EMOTION is considered a travel package, and CANNOT be ridden for free with the Japan Rail Pass, JR EAST PASS or any rail pass. It is only sold as a package comprising of:

*As a COVID-19 precaution, for restaurant trains like the FruiTea Fukushima and TOHOKU EMOTION, items from the self-service or buffet area will now be brought to customers on an order basis instead.

A package on the TOHOKU EMOTION costs around:

There is a supplement of ¥3,000 per room for the private compartments. Unfortunately, single diners are not permitted, and reservations can only be made for two people and above.

The TOHOKU EMOTION usually operates four times a week on Fridays to Mondays, with one round trip per day. The outbound lunch course is around 11:05~12:56, while the inbound desserts buffet course is around 14:15~16:07.

Reservations can be made at JR East View Travel Service Centers around Eastern Japan. Major stations like Tokyo Station, Shinjuku Station, and Ueno Station have English-speaking staff to assist with your reservation. Click here for more information on the TOHOKU EMOTION in English, or here for Japanese.

If you are visiting the Tohoku region to ride the TOHOKU EMOTION and explore the northern prefectures of Aomori and Iwate, check out the JR EAST PASS (Tohoku area), an affordable pass offering unlimited rail travel on JR East lines (including bullet trains) in the area for 5 consecutive days. At only ¥20,000, it costs less than a round-trip between Tokyo and Hachinohe (~¥33,000). You can also make seat reservations for bullet trains online for free, up to 1 month in advance, here. The JR EAST PASS (Tohoku area) can be used for automatic ticket gates, and foreign passport holders living in Japan are also eligible to use this pass.

NOTE: From 1 April 2021, there have been some changes in the validity and pricing of the JR EAST PASS (Tohoku area). For more information, please check here.

Having visited all 47 prefectures of Japan, Carissa's next goal in life is to ride all the sightseeing trains in Japan and climb all its 100 famous peaks. Sounds like a dream? Check back in 50 years.
View More

Ainokura: A tranquil village in the Toya...

Cruising along the Sea of Japan with the...